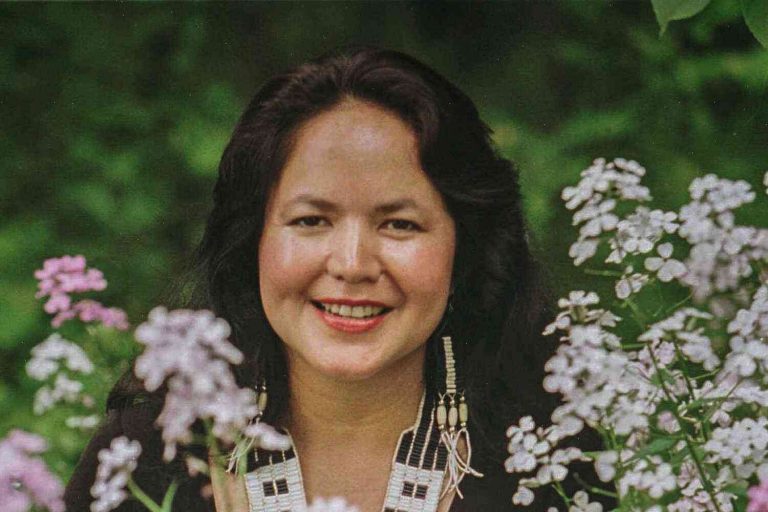 Joanne Shenandoah, a poet, storyteller, language artist, blues musician and political activist, died Nov. 1 at St. Joseph’s Medical Center in Phoenix. She was 64. Her death was confirmed by Arizona State University’s Latin American Studies Program, where she was a professor emerita.

In a video posted to YouTube in August, Shenandoah remembered the complex relationship between white people and Native Americans in her native Arizona.

Her first major musical achievement was to compose “Taj Mahal Blues.” During a show in Madison, Wisconsin, Shenandoah and Dennis Lee performed the piece, singing “the voice of the earth/the folk pain and the ruins to be/There’s death, death everywhere/Farther and farther the land/Under my own feet/Oh, how I want to lose the last old roll of cotton.” Lee also performed the song with her.

According to her biography, Shenandoah studied literature, theater and medicine at Arizona State University. While in Philadelphia, she met her husband and music partner, Doug Mahal, who was then in the same band, The Blasters. Mahal wrote all the songs for Shenandoah’s first solo record, “A Little About You.”

“There was no downtime in her life,” Mahal said in a video statement. “She loved the theater, she was a very natural musician. … She always had her feet on the ground, never let loose.”

During the show, Mahal shares memories of Shenandoah and her groundbreaking music.

… Native American culture informs me, especially as a Mexican American woman. I lived in Phoenix for five years and met Joanne in 2006, at an Indian Summer Music Festival. It’s beautiful to think that I might have met someone who made Native American music, but also who was a poet, storyteller, a linguist, a dancer. She said what needed to be said, but in a unique way, and one that echoed across cultures. She inspired me, even though she lived in Santa Fe. She inspired me in so many ways. She moved me from living in a space of white privilege to a space of empathizing with people of color who need love, sustenance, resilience, compassion, and support.

Shenandoah also wrote two memoirs: “Reverting to Plains” and “Walking Backward.” A biography of her and Mahal on the Department of Interior’s websites said she “experiences pain and loss, but her spirit transforms into remarkable strength.”

CalSO: my own personal particle accelerator